7 Things You Didn't Know About Your Own Willpower

Changing how you think about your own willpower will give an instant boost to your self-control. 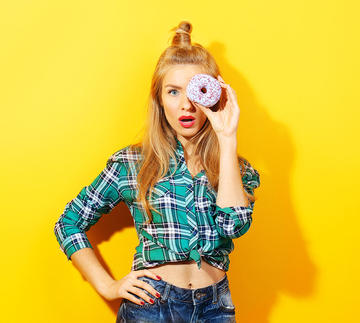 Willpower, or lack thereof, has been blamed for failed diets, missed fitness goals, credit card debt, and other regrettable behavior since the third century B.C., when the ancient Greeks began to study self-control as a means of overcoming destructive behavior. Still, 27 percent of people report a lack of willpower as their greatest obstacle to change, according to the American Psychological Association.

For decades, most psychologists believed willpower had limitations. Like fuel in a gas tank, willpower is burned when you exhibit self-control. Once the supply runs out, you give in to temptation.

So, what can you learn from all this chatter in the psych lab? Here are seven surprising facts about willpower that can help you improve your self-control and reach your goals.

#1. Believing your willpower is limitless will make you happier.

Researchers at the University of Zurich found that people who see their willpower as unlimited are happier with life in general and are better able to cope when life gets more demanding. Researchers surveyed hundreds of university students about their willpower beliefs and life satisfaction at the start of the school year and then again just before exam time six months later. Beliefs in unlimited willpower were associated with more life satisfaction and better moods at the start of the year, and also with more sustained positive well-being as the exam period approached.

#2. Willpower is not a virtue.

Because willpower is often associated with resisting negative behavior, it's unfairly associated with morality or integrity. In The Willpower Instinct: How Self-Control Works, Why It Matters, and What You Can Do to Get More of It, author Kelly McGonigal argues that willpower is a mind-body response, not a virtue. Willpower is a neurological function: The brain is telling the body what to do to help you achieve your goals. Morals are philosophical, not physical. Good news: Eating that doughnut does NOT make you "bad."

#3. You can't rely on willpower for long-term changes.

Your brain has two distinct systems that drive behavior: the "go" system and the "stop" system, according to Art Markman, Ph.D., author of Smart Change: 5 Habits to Create New and Sustainable Habits in Yourself and Others, and professor of psychology at the University of Texas at Austin. The "go" part of the brain drives you to act and learns behaviors. The "stop" system inhibits the actions your "go" system wants you to do. Willpower is part of the "stop" part of the brain, which is the weaker of the two systems. This means, while you can stop yourself from acting on a desired behavior for a period of time, your brain's desire to act will eventually overpower your willpower. So, if you're relying solely on willpower to quit your 3 p.m. Starbucks run, you're setting yourself up to fail.

Markman says the long-term solution to controlling a behavior is to reprogram your "go" system to drive more desirable behaviors.

"Your 'go' system can't learn not to do something," says Markman. "You need to create positive goals, not goals for things you want to stop doing." Instead of focusing on quitting your afternoon snack run, put time in your calendar at 3 p.m. to read up on media that can help your career or meet with a colleague to discuss new ideas. See how we turned a don't into a do?

Reprogramming your behaviors is critical for achieving change, but what about when you just want to avoid texting your ex on his birthday? You still need willpower to help resist making life's everyday bad decisions. "One of the most common misconceptions about willpower is that your either have it, or your don't," says Chloe Carmichael Peet, Ph.D., a New York City–based clinical psychologist specializing in stress management, relationship issues, self-esteem, and coaching.

Some people are born more sensitive to emotional triggers and temptations than others. But, just like you exhaust muscles to build strength, you can increase your self-control stamina by exerting willpower.

"Willpower is a skill," says Carmichael Peet. "If you struggled with willpower in the past and say, 'I just don't have willpower, it's not part of who I am,' that becomes a self-fulfilling prophecy. But if you alter that to say, 'I haven't spent enough time developing willpower,' you'll create space for yourself to learn some skills."

According to Carmichael Peet, willpower can be developed the same way you learn to pitch a fastball: repetition. "The more you push your willpower, the stronger it will become," she says. "As you practice restraint, it becomes easier for you."

#5. Motivation and willpower are different.

Michael Inzlicht, Ph.D., professor of psychology at the University of Toronto Scarborough, says he believes a lack of motivation—not lack of willpower—is the reason people give into negative behaviors. "The depletion idea of willpower running on some sort of limited fuel is incorrect, in my opinion," says Inzlicht. "Yes, we're less likely to stick to our diets when we're tired, but I don't think this is because self-control has run out. Instead, we are less motivated to control ourselves when we're tired. It's less a question of being unable to control, and more a question of being unwilling to control. When the willingness is there, people can control themselves even when tired."

Have you ever spent the day biting your tongue with a condescending coworker, then gone home to eat a sleeve of Chips Ahoy and down a half bottle of Malbec? Interacting with others and maintaining relationships can be extremely mentally exhausting, leaving you less motivated to resist negative but satisfying behaviors, according to the American Psychological Association.

#7. The power of distraction may be the only power you need.

"Willpower might be overhyped," says Inzlicht. "It might actually be less important than you think in helping you reach our goals." What is important? Removing temptation. Inzlicht and his collaborators looked at the self-control people used to complete a word game. The researchers asked people to set goals and keep journals about their progress over the course of three months.

Inzlicht found that in-the-moment self-control did not directly predict whether people met their goals three months later. What did predict goal success was whether or not these people faced temptation. Those in the study who arranged their lives—physically or psychologically—so they encountered fewer temptations were the ones who were most likely to meet their goals.

Coming up with a strategy to avoid temptation is as critical as increasing your ability to resist it. Think of it this way: If you never set foot in your ex's apartment, you're far less likely to relapse and hook up with him again, willpower or not.

Personal Best: The tools and inspo you need to crush your goals (whatever they are!) all year long. Join our Personal Best Facebook Group for 24/7 squad support and share your wins—big and small—on social using #mypersonalbest.

Creating Hope for Your Future


Stop feeding your mind thoughts about the past. Forgive those who have done you wrong and forgive yourself too. Start seeding thoughts and actions which will lead to a happier tomorrow.


Don't let the darkness of your past block the light of joy in your present. WHAT HAPPENED IS DONE! Stop giving time to things that no longer exist when there is so much joy in the here and now.


What are the most powerful words in the universe? The ones you use to talk to yourself!


Choose to live each day directed by love and purpose not fear and wounds.


Offer to the world what you want to attract. If you want love, offer love to everyone you meet. Become what it is you feel is missing in your life.


You're more than the mistakes you've made. You are the wisdom, strength, compassion and growth you've gained from all you've been through.


Being positive in a challenging situation is a sign of wisdom and character.


Consciously choosing your thoughts allows you to be in control of your mind and emotional state-instead of the other way round!


Don't believe everything you think!


Every thought we think is creating our future.


We wouldn't pay to watch the same painful movie two hundred and fifty times, but somehow, we allow our mind to replay the same bad memory over and over, each time experiencing the same distress and shame.


Getting over a painful experience is much like crossing monkey bars. At some point, you just have to let go in order to move forward.


The worst bullies you will ever encounter in your life are your own thoughts.


Worry is the darkroom in which negatives can develop.


The way we treat people we strongly disagree with is a report card on what we've learned about compassion and kindness.


Needless drama doesn't just walk into your life out of nowhere-you either create it, invite it or associate with those who bring it.


Sometimes you have to tell the negative committee that meets inside your head to sit down and shut up!


People are desperate for a solution as long as they don't have to do anything, change anything, or spend anything.


Anxiety happens when you think you have to figure everything out at once. Breathe. You're strong. You got this. Take it day by day.


Integrity is choosing courage over comfort. It's choosing what is right over what is fun, fast, or easy. It's choosing to practice your values rather than simply professing them.


You cannot force someone to comprehend a message that they are not ready to receive. Still, you must never underestimate the power of planting a seed.